The tower of Montefano, is situated in the historic centre of Montefano, a hill town with about 3.000 inhabitants, situated between the valley of the rivers Monocchia and Humicello, between Ancona and Macerata on the road “Settempedana”. 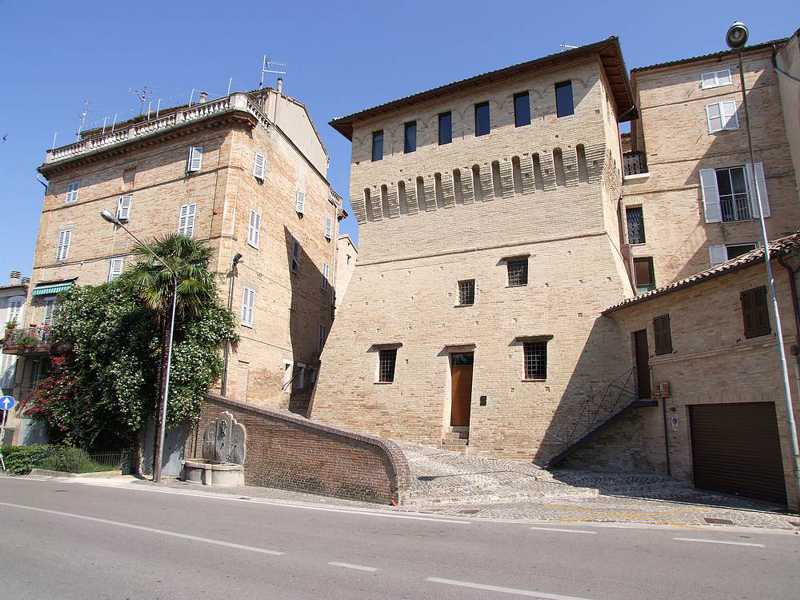 The sources that allow us to trace the history of the town are unknown but there is a widespread agreement among historians that Montefano and Filottrano originated from destruction by the Goths of the Roman colony Veragra, inhabited by the Piceni as testified by the remains preserved in the National Museum of Ancona.
Montefano is historically linked to the town Osimo from which it depended on various times and for long periods, in fact it was Osimo that fortified the town, including the construction of the Tower.
The history of the Tower is intertwined closely with that of Montefano also because the present building was erected by Francesco Sforza on the ruins of an earlier fortification that was badly damaged in 1434. The old Tower probably of the 13th century, was replaced by the current Tower but its origins coincide with those of the town and its earliest fortifications.
In the year 1450 the town of Osimo undertook to rebuild the fortress that was rundown due to the numerous lootings. Giovanni Venanzio was hired and perceived a fee of 3 florin for every 2 meters of tower built, 24 barrels of wine and 3 tons of wheat.
According to the town archives of Osimo the expenditure incurred for the construction of the tower was 1259 florin. This sum was made up of various items, namely 852 florin for la tower, according to the corresponding measurement of 564 meters, 210 florin for 336 meters of wall, 39 florin and 35 bolognini for the 88 meters of the base of the fortress and 13 feet, 157 florin and 10 bolognini for the basement, which was 74 meters.
The term turris is used in documents to indicate the tower or the fortalice. The building in question can be classified as a Fortress (or more commonly Tower) indicating with this term a simple and fortified building, consisting of a compact wall block that stands out in relation to the town that is both isolated and integrated. It has in fact an analogy with the traditional base of the tower and projecting apparatus consisting of merlons, corbels and drains extended to the entire defensive perimeter.
What is not to be overlooked is the fact that when planning a fortress, after the introduction of firearms, the main objective was to get the best ballistic profile possible, whereby these solutions were implemented to exploit, in addition to the resistance offered by the building materials, also the shape of the building.

In the State Archives of Macerata there is an inventory from the 15th December 1552 of the Tower’s munition, it states that there were: 16 wall guns; 12 shotguns; 15 harquebuses; 3 muskets; 3-iron tools to hold bipods for the large harquebuses; 3 armours, two white and one black, 12 powder flasks for harquebuses; a musket with iron tail; 2 stands to hold the harquebus; a basket with some coal; 2 crates, in one there was harquebus powder and in the other potassium nitrate and a box of sulphur. In another inventory of 1558 can also be found: an ancient helmet; 40 bolts (crossbow ammunition) and a crossbow lever; 8 Spears; 2 Springalds set in wood; a catapult, that shot iron balls of 4 lbs and 8 new spears.
A key feature of the building and which characterizes the military architecture is the battlements. Overall in the secondary defence work the merlons have a particular purpose because they were made from a concrete need relating to war strategies, they gradually become more popular until they lost their original role and become a decorative element. Its origins can be traced back to the low wooden pinnacles that crowned the aggers (Roman ramparts) but the idea of a parapet more or less alternating with empty spaces known as crenels, behind which, depending on the necessity, hide and attack can be considered a universal idea.
In Roman times this particular hiding place was wide enough to protect a man, but over the centuries the battlements became progressively wider and arrow slits were added (found on the towers external merlons), for archers to launch arrows. In the 15th century the introduction of artillery maked them useless, but their distinctive and ornamental character remains.
The tower’s battlements jut out and sit on corbels interspersed with embrasures, also known as machicolations, which indicates a trapdoor through which was possible to throw on the enemy below any type of bullet or blunt object, these were exploited as a defensive position against assaults to the tower.
The use of this expedient defence in Italy, dates back to the mid-14th century. From the eighteenth century less defence was needed and the structure was colonized: the ground floor was occupied by a butcher and is still present today, the basement an olive-press and the last floor a house.
The architecture underwent inevitable changes bending to the new use: above the battlements a cover was added, the old walls in the basement were partly removed and windows and doors appeared.
After the demolition in the early ‘ 900 of the western door at the centre of the tower an eclectic house was attached; at the same time the spaces between the merlons were clogged with masonry and many of the “dovetail” battlements were demolished. During these works the then “Superintendent of medieval and modern art of Marche and Dalmatia” ordered the restoration of the battlements and there still remains a copy of the original note. Today the tower is a private residence.

The restoration works were planned bearing in mind that changes and continuous mutations are the fate of all architecture; so leaving a testimony of the historical stratifications (differences between 15th and previous part, traces of the western door, etc.) different design solutions were adopted.
At the same time it was decided to make an explicit reference to the tower-house highlighting the superimposition occurring over time; in accordance with the Superintendent of Marche, windows were inserted within the battlements adapting them so as not to see the uprights. Both the cover (rundown) and the top of the brickwork were removed and replaced with a new brick wall.
The external staircase in cement at the base of the tower was replaced with one in iron and brick.
Particular attention was paid to the choice of materials for the renovation of the facade and the colour of the house, reconstructing the original colours. 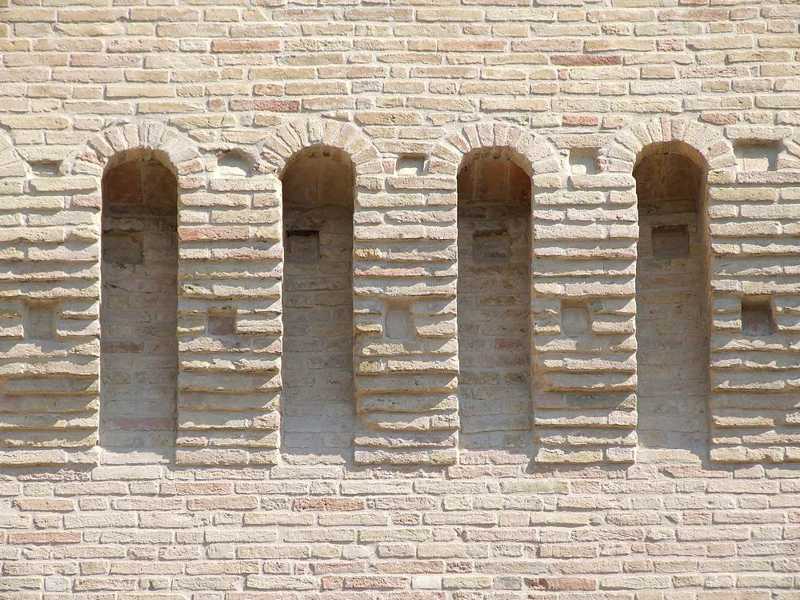 Products based on natural hydraulic lime NHL2 from Wasselonne were used. The sealing of the joints between the bricks was done by replacing and consolidating, where missing, inconsistent or degraded existing mortar was found with Malta Antica. The physical and chemical properties of the product and the light brown colour brought the Tower back to its original form.
The surface restoration was preceded in some parts by dismantling and reconstruction and “remove and replace” until the joints were meticulous. The attached house was restored with a careful focus on the plaster, friezes and the bars on the windows.
The existing plaster after careful cleaning and fixing of the degraded parts was levelled and made uniform with the application of Arenino Vk2, a lime based mineral finishing plaster. This product’s natural features and excellent vapour permeability, give the facade a cloudy chromatic appearance typical of the original techniques used in the past, achieved with the help of fine toothed trowels.