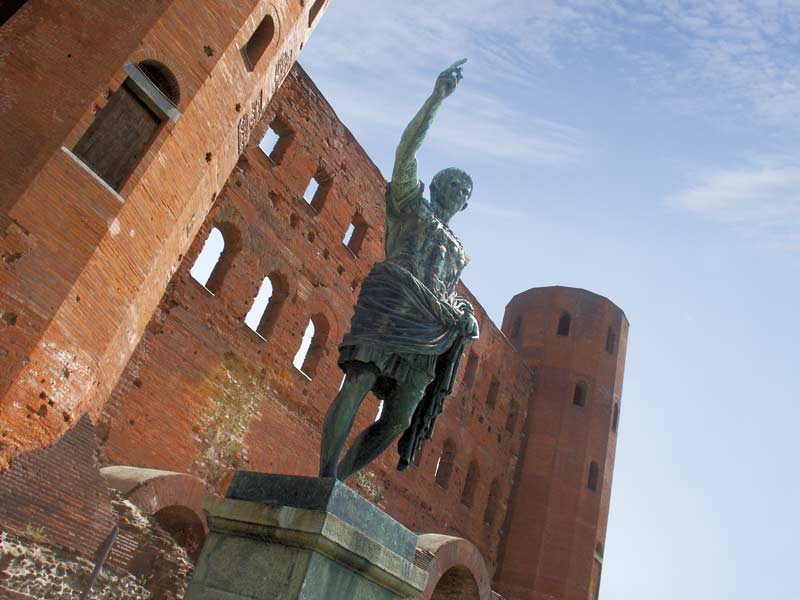 The city of Turin entered history at around 27 AD, with the name of a Roman colony “Augusta Taurinorum”.

The city arose on the settlement of Taurasia, mythical capital of the Tauri, burned by Hannibal in the long march towards Rome.

The Foundation of “Augusta Taurinorum” re-entered Roman administrative organisation and logistic plans for Piedmont as soon as it was conquered. The colony at the foot of the main Alpine passages and the western side of the Padana Valley was to be the Roman outpost towards Gaul and was in the centre of the main roads that led towards the transalpine world.
The city was given the traditional orthogonal shape of Roman colonies, with square blocks, crossed by two main streets and surrounded by high walls and gates.

Access was by means of the four gates that opened along the wall in correspondence to the Cardo Maximus and the Decumanus Maximus: Porta Palatina, Porta Decumana, Porta Marmorea and Porta Pretoria.

The only one still visible today is the Porta Palatina that dates back to the 1st-2nd century AD. The name “Porta Palatina” comes from the medieval “Porta Palatii” which means the contiguity of the Imperial Palatium, likely abode of the Longobard Dukes and the Frank Counts. Quite similar to the ancient Porta Decumana, built into the medieval structure of the present-day Palazzo Madama, the Porta Palatina represents an example of a typical Roman gate facing a cavaedium (quadrangular courtyard on the inside of the city walls), the remains of which are placed in front of the gate. Erected on a square base, the two angular towers are more than thirty metres high and feature a sixteen-sided structure. The central body, namely the interturrio, is about twenty metres long and is characterized by two orders of windows, the lower one composed of arch windows and the upper one made up of jack arch windows. The underlying portion features four entryways: the central ones are larger and taller and are vehicle accessible, while the two entryways to the sides are narrower and shorter and served as pedestrian passageways. The grooves along the entryways’ inner walls suggest the original presence of the so-called cateractae, an alleged system of gate gratings operated from the upper floor.

The Palatine Gate was threatened with demolition in the time of Vittorio Amedeo II, but was saved by the intervention of architect and engineer Antonio Bertola, even though it did not escape unscathed. In 1724, further alterations were made to the construction and it was used as a prison by the Vicariate and again in the 19th century. Between 1860 and 1871 the monumental building was insulated and subsequently repairs were attempted which constituted a veritable reconstruction. During the works, some medieval superstructures were destroyed such as the battlements dovetails, which were necessary perhaps to give some indication on the original height of the towers. In the early ‘ 900, following the excavations of Carlo Promis, renovations commenced then more recently, work on the insulation that eliminated the inappropriate joints.

On July 17th, 2006, after eighteen months of work, the archaeological Park of the “Palatine towers” was inaugurated in Turin.
The grandeur of the gates together with the almost 20.000 square meters of park offers citizens and tourists a unique and priceless monumental archaeological area.

The architect and designer Aimaro Oreglio d’Isola coordinated the work: “we wanted to give the city not yet another work of architecture, but a park. The meaning of the restoration was to build a pleasant place, non- grey, and an area of silence amid the urban chaos”.

A paved Street in “opus incertum” with stone slabs and grass tufts, marked by soft terracotta curbs, accompanies the visitor under the Roman gate. To the side extends the large green lawn leading to XX settembre road, contained by a wrought iron gate and fairfaced brick columns made by hand using original historical moulds. 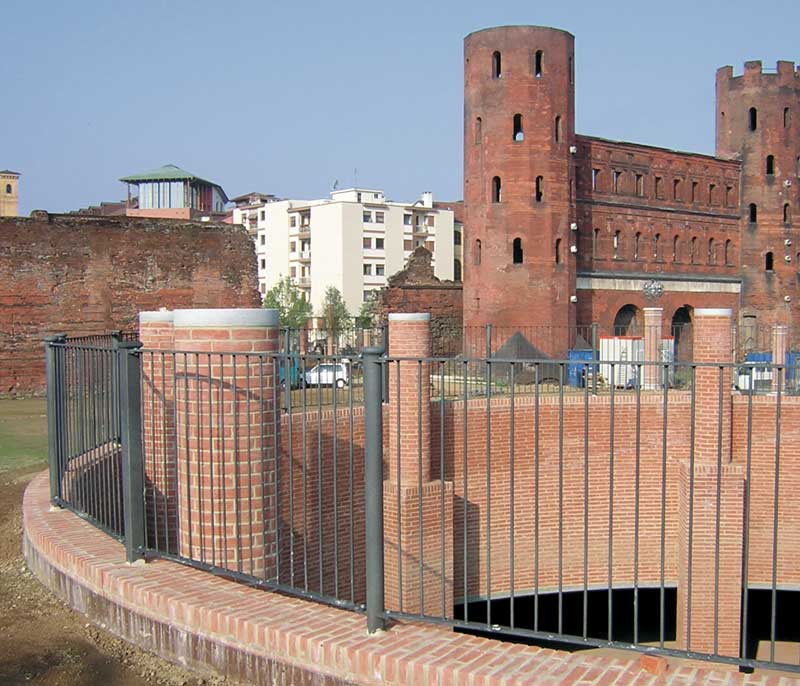 A brick bastion, which descends steeply to the fountains and which recalls Medieval moats, retraces the ancient path of the Baroque fort, creating a gentle slope: on top, there is a patrol path along the wall lined with tilia trees, which offers a view over Regina Margherita Road and the Porta Palazzo market. Finally, below the bastion, a parking lot has been built, which leads to the middle of the Park thanks to an open-air area, which creates a well of light with steps that lead to the park. The use of the product Paramano Mpd20, a premixed coloured mortar, optimized the restauration of the walls, offering a constant and consistent colour, limiting the possibility of saline efflorescence, thanks to its water repellent properties.